Dairy products are a key source of proteins and fermentation is the important step in preserving milk that would otherwise have a short shelf-life. Lactic acid bacteria convert the sugars in milk (lactose) into lactic acid, with carbon dioxide as a by-product. The milk is heated to a mild temperature (around 25°C) to allow the bacteria to grow and divide. An enzyme called rennet is added that makes the fermented milk coagulate and stick together. Excess liquid is drained away and ‘fresh’ cheeses like cottage cheese or quark are ready for chilling and consumption at this point. Harder cheeses are left to drain further and have a short maturation time before they are ready for consumption. Some types of cheese are left to mature for longer time periods, where they gain characteristic smells and flavours.

While large-scale production of cheese uses starter cultures of bacteria to be added to the milk, many cheeses rely on bacteria naturally present in the milk. These vary between different animals, or even between different breeds of animal, and so lend some of the specific characteristics to different cheeses. Cheeses that are allowed to mature over long periods have a secondary microbial community associated with them for the ‘ripening’ process. This community carries out complex biochemical reactions on the cheese proteins, give rise to very distinctive characteristics. Blue cheeses are ripened by certain types of fungi (moulds) that have prominent blue colours. In some countries, e.g. in Europe, cheese ripening is carried out in limestone caves and the secondary ripening microbes are associated with specific individual caves.

The process of making yoghurts is essentially the same as for cheese. Lactic acid bacteria ferment milk lactose into acid, which lowers the pH and helps to make the yoghurt thicken. It is thought that the origin of the word yoghurt was a Turkish word for thicken, coagulate, or curdle, and there are records of yogurt making from 6000 BC in India. Like cheese, the bacteria associated with the type of milk lend a characteristic taste, because of the differences between them.

Commercial yogurt production relies on addition of defined types of lactic acid bacteria, meaning the fermentation process and flavour can be controlled. Yoghurt can be thickened further by straining, to remove excess liquid (or whey), and in this form is often referred to as Greek yogurt. Yogurt is often sold with added sweeteners, like fruit or honey. Different countries have various names for fermented yogurts.

Pasteurisation is the process of killing unwanted microbes in foodstuffs by heat treatment. It is named after the famous microbiologist Louis Pasteur. Milk is pasteurised by holding it at a high temperature for a short time, for example at least 71.7°C for 15 seconds or any equivalent combination. By law, fresh milk must pass a test to show the heat treatment has worked, and that the levels of microbes have been sufficiently reduced. UHT, or ‘ultra-high temperature’ treated milk has a longer shelf life because it is pasteurised at a higher temperature (at least 135°C) and tends to be stored in stronger containers such as cans.

Although it is possible to buy raw milk, which has not be pasteurised, there is a potential that it contains harmful microbes like Shiga toxin-producing Escherichia coli (e.g. E. coli O157:H7). It is illegal to sell raw milk in Scotland, whereas it is possible in England, Wales and Northern Ireland where there are laws that control how it is sold at farms and how it is transported to try to keep it as safe as possible. 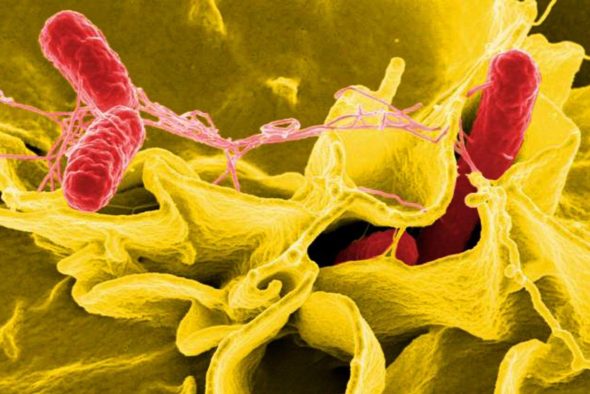 Many different types of bacteria can cause foodborne disease. Currently, the most important foodborne bacteria in Scotland are Campylobacter, Salmonella, Listeria and E. coli O157.